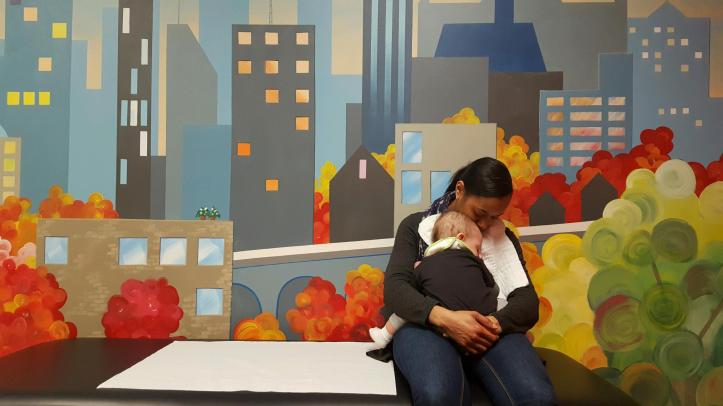 This picture was taken during our most recent visit to the doctor, one of several within the last month. Tommy took this photo as we waited to be seen. It was obvious that our baby boy wasn’t feeling well because at any other appointment he would be actively trying to crawl around and touch everything. Not this time. He sat calmly, with his head on my chest, dozing off every now and then.

The last month has been rough in our household. Jaden has suffered through several episodes of illness since early February including pink eye (twice), two double ear infections, diarrhea, and most recently, a high fever associated with some kind of virus. On top of all this he is also teething. Between his regular well baby check, sick visits, and ear re-checks we’ve been to our pediatrician’s office at least 6 times. There have been countless calls to the nurse, several days of leaving work early, and missed days of work and daycare. All of this has made for one stressful month. It’s been hard to see my baby endure so much in such a short period of time. Now, more than anything, I just want to see him healthy.

I’ve found myself struggling with feelings of guilt as we have dealt with all these health issues. I feel guilty for having to go to work and leave my baby, letting other people care for him during this time. On the other hand, I feel guilty for having to leave work early or miss days entirely. I know this feeling of guilt stems from my tendency to be harder on myself than I need to. I know there’s no reason for me to feel any sort guilt. I’m doing what needs to be done to care for my child and even with the missed days of work, I’m keeping up with all of my tasks. On top of that, my supervisor and co-workers have been very understanding. We also have Jaden in an amazing daycare; his teachers love and care for him well. I have to keep reminding myself that I’m doing the best I can.

Throughout this last month I have been amazed at how well Jaden has handled everything. For the most part, he has continued to be his happy self as he has dealt with all of these health issues. He continues to share lots of kisses, smiles, and laughs. That’s one thing I love so much about my son and his personality. No matter what, he still remains such a happy little guy.

Jaden’s fever broke early Sunday morning so it seemed things were beginning to look up for us. However, his temperature began to rise again later in the day. Right now my prayer is that Jaden’s health is restored and that we can begin to get back to a normal, sick free life.

Keep baby boy in your prayers.