Parenting is hard work. I’m sure most would agree with that. It’s often us moms who get the recognition for all of the work that is put into raising children, mostly because in our society mothers are regarded as the primary caregivers. In conversations with other moms, I often find myself talking about how difficult being a mom can be, the sacrifices made, the energy it takes, etc. All those things are valid; being a mom is hard .

Recently, as I was thinking about how often I have expressed those exact sentiments to Tommy, a new thought entered my mind. Yes, I know that my role as mom has been hard and full of sacrifice, but what about my husband? Hasn’t being a dad been just as hard and just as full of sacrifice? I wondered what Tommy thought of his role of dad. I wanted to know his perspective, a perspective that I feel like often gets overlooked, and one that we have never really discussed as a couple. One day over dinner, I asked Tommy some questions about fatherhood and here’s what he had to say:

What has been most difficult about being a father?

I didn’t want to end the conversation there, only discussing the difficulties. I also wanted to know what have been the highlights of being a dad.

What has been most rewarding about being a father?

I really appreciated the conversation that I was able to have with my husband. Often times, it’s hard for Tommy to share what he’s feeling, but I’m glad he opened up and shared all these things with me. I now have an even greater appreciation for all he does for our family. As husband, father, and leader of our home he carries a lot of responsibility on his shoulders, but he handles it all so well. For that, I am thankful. I have learned that I need to remember that being a parent is hard, for both moms and dads. Our roles and experiences may look different, but we can’t underestimate the work and effort of dads. I want to challenge you to encourage and support the dads in your life as they strive to be the best fathers they can be. 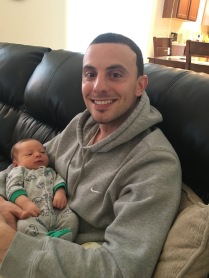